The huge procession began with 400 members of Bricklayers Union No. 6, all dressed in white aprons. They were followed by a band, and then the members of the Manufacturing Jewelers union. The jewelers marched four abreast, wearing derby hats and dark suits with buttonhole bouquets. They all carried canes resting on their shoulders (similar to the way infantry officers carry swords when on parade.)

As the day went on, the parade included contingents from the Manufacturing Shoemakers Union No. 1 (wearing blue badges), and an especially well-received contingent from the “Big 6” – Typographical Union No. 6 – whose 700-strong delegation marched with military precision. (They had practiced beforehand.) The Friendly Society of Operative Masons marched with their band. They were followed by 250 members of the Clothing Cutters Benevolent and Protective Union, the Dress and Cloak Makers Union, the Decorative Masons, and the Bureau of United Carpenters (who marched with a decorated wagon).

The parade was filled with banners: “Labor Built the Republic – Labor Shall Rule It”; “To the Workers Should Belong the Wealth”; “Down with the Competitive System”; “Down with Convict Contract Labor”; “Down with the Railroad Monopoly”; and “Children in School and Not in Factories,” among others. The members of the Socialist Singing Society carried a red flag with a yellow lyre in its center. The banner which perhaps summed up the entire procession best was carried by members of the American Machinists, Engineers, and Blacksmiths Union (who wore heavy leather aprons and working clothes). It read simply: “Let Labor Unite.”

It was the first Labor Day parade – and it took place on a Tuesday.

Labor Day became official in this country when the U.S. Congress passed a law in 1894 making the first Monday in September a legal holiday. But this holiday was not simply given to the workers of the United States by the government as some act of charity. The tradition of publicly honoring labor’s contribution to society is a custom established by the workers themselves.

The first Labor Day parade in the United States was held in New York City on Tuesday, September 5, 1882. More than 10,000 workers marched. It was organized by the Central Labor Union, a body representing 60 unions and over 80,000 people. The CLU was a secret lodge of the Knights of Labor, the major national union of the time. 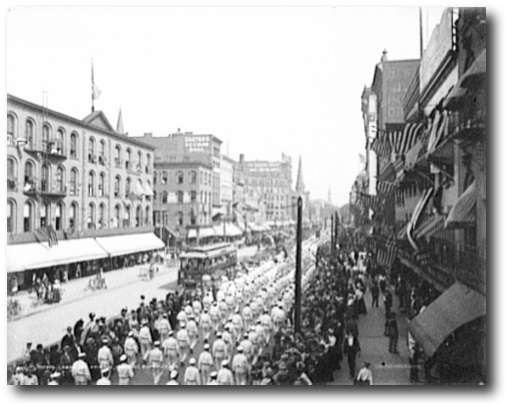 To really appreciate the September 1882 labor parade, it’s important to keep in mind the  profound changes that this country had gone through in the 17 years before it took place. After the Civil War ended in 1865, the capitalists of the North emerged triumphant. They went on the offensive, bitterly opposing labor’s demands. By the time the depression of 1873 took place, any lingering unity between the different forces which had united in opposition to slavery had been torn apart.

On Saturday, July 21, 1877,  17 workers involved in a nationwide railroad strike were shot dead in Pittsburgh. The next day, the Rev. Henry Ward Beecher, a New York Protestant minister who had been one of the most eloquent orators against slavery, preached these words:

“God had intended the great to be great and the little to be little. … The trade unions, originated under the European system, destroy liberty. … I do not say that a dollar a day is enough to support a man and five children if he insists on smoking and drinking beer … [b]ut the man who cannot live on bread and water is not fit to live.”

The 1882 labor parade was the culmination of more than 10 years of agitating and organizing by dedicated labor activists in New York. These activists were deeply committed to the fight for the eight-hour day and against the repressive tactics of the employers. They also worked closely with the leaders of what were at that time New York’s largest immigrant communities to assist the fight for justice in three countries: Ireland, France, and Germany.

The 1882 parade took place in a city which had seen militiamen open fire on Irish-American Catholic demonstrators in 1871; where thousands demonstrated for the eight-hour day in 1872; and where three demonstrations had already taken place in 1882 to demand justice for Ireland in its fight against British rule. (All three demonstrations had been jointly sponsored by labor organizations and organizations fighting for Irish freedom.)

Because the 1882 labor parade was held on a work day, most of the participants had to give up a day’s pay in order to march. (The CLU even levied a fine on non-participants.) In all, the workers involved forfeited about $75,000 in lost wages.

The vibrant character of the labor movement of that time can be seen by looking at three extraordinary people present on the reviewing stand at the 1882 parade:

Patrick Ford was the publisher and editor of the Irish World, a newspaper which strongly supported labor and the fight for Irish freedom. He had been brought to Boston from Ireland in 1842 at the age of seven. Ford had served his printing apprenticeship with newspaper editor William Lloyd Garrison, America’s leading opponent of slavery, before the Civil War. In 1870, Ford founded the Irish World, a newspaper which was regularly suppressed when it was shipped to Ireland.

John Swinton was the chief editorial writer of the New York Sun. Born in Edinburgh, Scotland, he had moved to New York in 1850 and worked as a printer and became an abolitionist. Swinton had been with John Brown when he made his famous raid on Osawatomie, Kansas in 1857. (Swinton would go on to start his own pro-labor newspaper in 1883.)

Carl Daniel Adolf Douai was the publisher and editor of the New Yorker Volkszeitung, a Socialist German-language daily. Douai was a German immigrant who had been threatened with lynching when he spoke out against slavery while publishing in Texas. In 1860, he moved to New York where he became active in Socialist, abolitionist, and Republican Party activities.

The presence of these three men on the reviewing stand – and the presence of Irish, French, and German flags (in addition to the U.S. flag) at the picnic which closed the day — illustrates the wide scope of labor’s concerns at that time. These leaders’ involvement with the parade (and the militant banners carried by the marchers) show that from its very beginning, the U.S. labor movement has been about more than just getting its members a few cents more an hour in wages. From its inception, the labor movement in this country has included both native- and foreign-born leaders, and immigrant workers have always played an important role in the labor movement. From the very beginning, the U.S. labor movement has included elements who have not been afraid to challenge the legitimacy of the wages system itself.

The article on this page was written by Chris Mahin for the Education and Mobilization Department of the Chicago & Midwest Regional Joint Board of UNITE HERE and originally appeared on the Joint Board’s website.

Special thanks to Brother Mahin for allowing the Pennsylvania Federation access to his writings.

Theme by Anders Noren — Up ↑